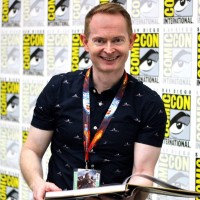 John Walsh is a trustee of the Ray and Diana Harryhausen Foundation. He is a double BAFTA and Grierson-nominated filmmaker whose work focuses on social justice giving a voice to otherwise unheard contributors. After graduating from the London Film School, John founded his own film production company, Walsh Bros Ltd, which became one of the UK’s top 100 production companies.

His first feature film Monarch was restored and remastered after John tracked down the original 35mm camera negative in a film vault. This was the subject of a major BBC News story about lost films. Available now on Prime Video.

John’s controversial feature film about UK politics ToryBoy: The Movie received cinema releases in 2011 and 2015 and was nominated Grierson Award for “Best Documentary on a Contemporary Theme.” The film uncovered major political corruption in the North East of England and exploded onto the nation’s front pages and media when he exposed “Britain’s Laziest MP”. The film unlocked politics to a wide audience and is Britain’s most successful political documentary feature film. Available now on Prime Video.

John met Ray Harryhausen as an 18-year-old film student and made a film about his life and work. John worked closely with Ray to preserve his legacy and the creature collection and recorded commentaries for his films. Ray asked John to become a Trustee of the Ray & Diana Harryhausen Foundation. John is also a public speaker at film festivals and events around the world.