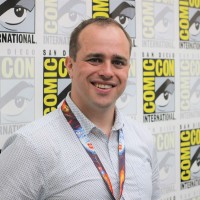 Connor Heaney is the Foundation’s Collections Manager, and deals with the day-to-day care of Ray’s archive. His responsibilities include the cataloguing, digitisation and conservation of the collection, as well as promoting the awareness of Ray’s work and legacy through worldwide exhibitions and events. Alongside administering and managing the Foundation’s physical archive and database, Connor is responsible for promoting our objectives through social media, podcasts and other media.

Connor has previously worked with Historic Environment Scotland’s National Collection of Aerial Photography, one of the largest archives of aerial imagery in the world. Previous projects which he has worked upon include 2014′s Creative Scotland funded project, ‘A Vision of the Commonwealth’, which showcased international aerial photography from the post war period in a high profile documentary. Additionally, he worked on the research, cataloguing and conservation of historical aerial survey as part of the Britain from Above project. He was also responsible for the digitisation and cataloguing of World War 2 reconnaissance imagery, which is used during surveys by bomb disposal experts across Europe. Connor holds an MA in Religious Studies and MSc in Archaeology, both from the University of Edinburgh.